The Green Innovation Centre – Nigeria through a grant agreement with the International Institute of Tropical Agriculture (IITA) is scaling up effort to curb the growing spread of the Fall Army Worm in Kaduna and Kano, through the project, Support the Development of the Maize Value Chains in the Federal States of Kaduna, and Kano, to reduce the damage to food production and impact to farmers across the country.

The project was developed in response to the negative impact of COVID-19 on maize and cassava value chains. Maize a major staple food crops in Nigeria, suffer low productivity due to several biophysical and socio-economic factors. These include inadequate input use, low awareness of improved agronomic practices, climate change, poor soils, pests, and diseases. Especially the Fall Army Worm a pest of the maize plant.

Fall Army Worm, a crop pest native to the Americas, has rapidly spread in Africa within the past five years, attacking maize in all its vegetative and reproductive growth stages. This rapid spread is due to the fact that the adult pest is very mobile, with a high potential to infest over a large expanse of land within a short time, causing up to 15% damage to maize production in Nigeria and in some cases a 100% loss.

From December 2020 and March 2021, an investigation implemented in Kano and Kaduna indicated the massive presence of FAW in both states and the farmers were unaware of field scouting methods, chemical treatment window, pest threshold, pest biology, and ecology, “said the lead scientist on the project, Dr. A. Togola. The investigation further revealed that only 10% of youth farmers and 40% of extension agents are aware of the safe chemical application methods for the control of FAW. The chemical measures widely adopted before the pilot by farmers wasn’t proven effectives as farmers reported resistance by the FAW to the chemicals been applied. 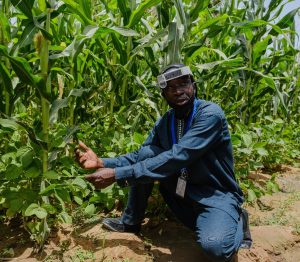 Dr. Tongola at the demonstration plot intercropped with soya beans

The project then demonstrated the IITA’s research on the effectiveness of the integrated pest management (IPM) technology as part of strategies to manage the FAW in maize production. A total of ten (10) seed companies, two hundred (200) extension agents, and thirty (30) youth farmers were trained to identify and assess FAW and other pest incidence as well as appropriate pest management techniques including chemical control, physical/mechanical control, and cultural practices. A training of trainers was conducted to build the capacity of the stakeholders on FAW detection and expansion in Africa, scouting, one of the detection techniques was demonstrated using the W shaped approach were EAs picked five stations at points on the W shaped. At the station, presence, and damage of the FAW was inspected on 50 plants, at 20% damage level, control measures were initiated.

The main target is to help farmers understand the stage and level the FAW control can be initiated. It is important for producers and users to monitor crops and to establish the occurrence of diseases and their development, possibly with support from extension workers. These data should be provided to extension services, plant protection services, and/or agricultural and forestry organizations so that forecasts can be drawn up based on a large body of data and farmers can be correspondingly warned. 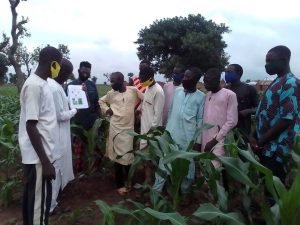 Integrated pest management (IPM) follows a careful consideration of all available pest control techniques and subsequent integration of appropriate measures that discourage the development of pest populations and keep pesticides and other interventions to levels that are economically justified and reduce or minimise risks to human health and the environment. IPM emphasises the growth of a health crop with the least possible disruption to agroecosystems and encourages natural pest control mechanisms. IPM is dynamic and flexible system that must always be guided by local conditions.

The IPM technology promoted comprises the use of neem leaf or oil mixed in water, intercropping, and handpicking of the lava to manage the devastating effect of the FAW. The use of the need leaf is a biological control method that is cost-effective and easily adopted by smallholders. The neem tree is common in the northern, Nigeria and is ecologically friendly with a few adverse effects on the soil, plants, and animals. Applying these control measures is expected to reduce the damaged caused by the FAW to less than 5% from the current 15% damage to maize farmers.